Our friends in Swanage gasped in disbelief when they heard a restaurant called ‘The Pig’ was opening in the area.  ‘We wondered who would possibly want to eat there,’ they told us.  ‘But we were wrong, it’s so popular we haven’t been able to get a table since it opened last year.’  Luckily they had reserved a table well in advance for our lunch together. 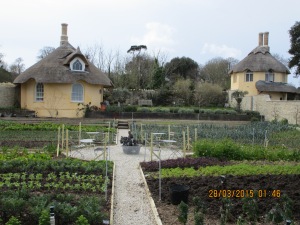 We met with time to look around the kitchen gardens in the sunshine, noting the well-tended vegetable, fruit and herb beds from which – we later learned – the chef uses as many ingredients as possible.  Anything not locally grown or reared is sourced within a 25 mile radius, giving rise to the name:  The 25 Mile Menu.  Dotted about the grounds quaint buildings offer boutique accommodation and, nearby, free range chickens were having fun scratching around a cliff-top field.

Wooden tables and benches, and more comfortable seats, faced out to sea.  We paused a while, looking across to our right at the Old Harry Rocks located at the most easterly point of the Jurassic Coast.  A few thousand years ago the chalk of the Old Harry Rocks was part of a seam connected to the Needles on the Isle of Wight, to our left.  The seam gradually eroded.  Today the chalk stacks of Old Harry Rock and the Needles are divided by the  sea. 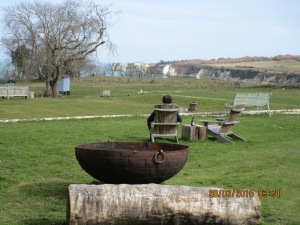 Feeling hungry, we made our way towards the main building where our table was laid ready in the Greenhouse restaurant:  the mis-matched white handled knives suited the shabby chic country style.  Dishes change daily and available ingredients offered plenty of choice.  The scallops were especially tasty, available as a starter or main:  our New Zealand Marlborough 2013  Sauvignon Blanc a superb accompaniment.

After lunch we walked through some of the ground floor rooms of the historical building that was built as a gothic fantasy in 1825 for the local Tory MP George Banks and his family of fourteen children.  Today the Grade II listed building is leased from the National Trust who oversaw the year-long restorative work.  We had to look carefully at the outside of the building to find the new wing before taking the path towards the beach.

The view over Studland Bay probably encouraged Churchill, Eisenhower and King George VI to come here in June 1944 to watch the troops practice the D-Day landings.  Real ammunition was used and mined booby traps, that had been laid against invasion, had to be cleared.  Being thirty metres in length and having concrete one metre thick all round, ‘Fort Henry’ is the largest and strongest observation post built during the war.