The vision of vast miles of sand dunes – stretching for miles across the desert – was fresh in my mind as our feet sank into the soft sand, still warm from the disappearing sun.

‘The desert is wonderful,’ I thought, feeling its magical beauty.  Smoke was rising over the white walls of the renovated fort, bringing an enticing smell of spices and meat:  it reminded our hungry tummies that soon we were to experience a ‘typical Bedouin evening.’

‘I bet they don’t have many authentic bedouin here, it’s an opportunity to get money from the tourists,’ said Paul.  ‘Let’s see,’ I replied as we passed three or four camels, their mouths loosely tied, reined and ready to ride, their pommelled saddles resting on brightly coloured blankets.

‘Choose a camel, it is safe.  The herder will make the camel kneel while you get on,’ said Mohammed, our driver and guide.  There were a few comments about camels having bad breath or biting, but several people took up the opportunity.  Paul and I declined.  We had ridden camels in Tunisia, afterwards feeling sorry for the restrictions imposed on them

‘The camels resting near the vegetable souk in the Buraimi Oasis, having crossed the desert with their Bedouin owners – when I was there in 1967 – had a far more interesting life,’ I whispered to Paul.

‘Something smells good.’  We sniffed the air.  Dinner was cooking in huge metal cauldrons attended by men in crisp clean robes.  One pot contained white rice, another was full of chicken flesh and vegetables, simmering in a deep orange sauce; the distinctive spicy aroma of curry blew in all directions on the evening breeze.  An attentive chef proudly spoke.  His few English words were difficult to decipher but, moving his arms in a wide circle, he indicated that the main dish was a whole lamb.  It had been cooking since early morning in the authentic Bedouin manner – in an underground oven.  He stepped back to lift the oven top, allowing hot air laced with the delicious fragrance of herbs and spices to rise up above our heads.

Walking past the male cooking domain, we reached an Arabic lady wearing a black hijab.  She was seated in a circular area, making flat bread, or pita, her nimble hands making it look easy.

Nearby, on a long table were containers of fruit juice, water, or camel’s milk that I enjoyed so much I had a second cup.  The waiters were informative… explaining that camel’s milk is very rich, and warning that it could cause belching…. and farting!  Later, I was glad it hadn’t had that effect on me….. and so was Paul!

I learned that camel’s milk contains more vitamins than cow’s milk, including vitamin C, protein and fat, whilst being lower in cholesterol, enabling Bedouin to survive solely on camel’s milk when travelling long distances through the desert.  Wondering whether it made them belch or fart, I remembered that in Arabia it is courtesy to belch loudly after a meal:  a mandatory sign of pleasure, so probably they welcomed this effect.

The lamb had been removed from the underground oven; slices piled high on a serving platter looked tender and appetising.  Waiting our turn, we discovered people were from various countries:  France, Italy, the US and Australia, many English, and our friends from Brazil.  The majority spoke English and they had been collected by car or taxi from various hotels in Dubai city for this desert sojourn.  The mood was friendly and expectant.  Acknowledging the commercial side of such an evening, most felt it would be fun as well as offering an insight into Bedouin life. 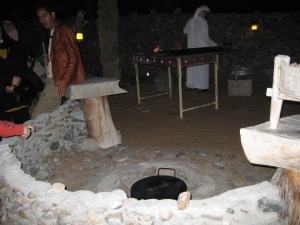 Young men carried trays between the food preparation and dining areas.  With our new Brazilian friends, we sat at a wooden table beneath a green awning held in place with rope and poles.  Exclaiming at the fantastic array of side dishes appearing, we waited no longer and helped ourselves. Various group members verbalised their appreciation::

‘The pita bread we saw being made tastes so fresh, great for scooping up these deliciously tasty dips.’

We licked our fingers before realising finger bowls also were on the table.

Using her skewered kebab to point at the stuffed vine leaves, another Brazilian lady joined in. She had little English:  ‘Delicious, perfect.’  She kissed her thumb and forefinger indicating her appreciation of this varied Bedouin spread, continuing:

‘I must stop eating.  I won’t have space for the main dishes,’ rubbing her generous expanse of tummy.

‘Me neither,’ rubbing mine.

But we did have room and those dishes were splendid, especially the succulent lamb with mouth-watering flavours.  To complete the meal Arabic coffee was poured from hand-made brass coffee pots into small porcelain cups that, without handles, resembled large egg cups.  Finally, plates of small Baklava – very sweet cakes – were brought by the waiter.

By now it was dark.  Off centre between the two dining areas flaming torches were being lit and placed around a raised platform;  local musicians materialised when we weren’t looking and a male dancer in local dress with long leather boots, leapt onto the stage, brandishing a sword above his head in time to the musical beat.  After a while he changed the sword for a wooden imitation rifle that he whirled around his body, up and over his legs and up his back in a typical Bedouin dance.

‘I imagined they would be simple sand squat areas, or chemical toilets in a wooden shack like those provided for the Abu Dhabi Defence Force in their tented camps, in the 1960’s.  But that might have been taking authenticity too far!’

Away from the light, the dark night sky was full of stars.  Outside the white fort walls, listening to the desert silence, we stood a while, picking out the Plough,  Jupiter and Saturn shining clearly and twinkling, enjoying this quiet moment together.

The fast sound of gypsy music grew louder as we returned to see a dancing lady in a brightly coloured blouse.  Her bare feet beat the stage as she flicked her long tiered skirt from side to side and back to front.  The rhythm increased with the booming beat until she bent forward from the waist with her head so low that her long brown hair reached the ground.  Her head swung swiftly from side to side, her hair whipping about.  The movements gained momentum, her feet beat faster and louder, hands quickly clapping, arms twisting, as she reached the final crescendo, throwing her head back to rounds of appreciative applause.

The air was cooling, the evening breeze picking up.  At our table some of the Brazilian contingent had left, making their way towards the parked vehicles outside.  Those remaining sat, eyes closed, leaning against each other.  I supposed Paul was chatting somewhere.  Whilst waiting I took a walk, committing to memory the night scene:  once flaming torches around the stage now dead, burnt out;  busy waiters in white shirts – less fresh than when the evening had started – collected screwed up paper serviettes and other debris from the fast emptying tables.  There, in the central area, I spied Paul.  He was sitting askew on one of the cushions that formed a comfortable rectangle, smoking one of the Shisha, or hubble-bubble, pipes set out and ready for use.

‘Everyone’s making for the Land Rovers,’ I said.

‘That was very pleasant,’ Paul spoke softly.  ‘A relaxing five minutes,’ rising slowly from the cushion.

‘Five minutes?’ I replied, chuckling.  ‘More like twenty, you looked as if you were in a trance….and I have evidence,’ tapping my camera.  We laughed.

While Paul had been experimenting with the shisha, the evening had been winding down.  It was time to reposition our head-gear and return to our classic 1950’s open Land Rovers to speed through sand dunes lit only by headlights.

Arriving back at the entrance to the Reserve, we swiftly swopped vehicles.  It was warm and comfortable inside the People Carrier.  We were driven along deserted dual carriageways on our way ‘home.’  Tall buildings stood either side, until the tallest building in the world and symbol of modern-day Dubai – the Burj Khalifa – appeared on the horizon, and we were returned safely from the Bedouin’s desert encampment to our modern glass skyscraper hotels.

Footnote:  In 1999, to preserve the desert habitat, 27 sq km had ben set aside for the Reserve by the Ruler of Dubai, His Highness Sheikh Maktoum bin Rashid Al Maktoum:  70 Arabian Oryx were released and 6000 indigenous shrubs and trees were planted.  Also, in 1999, the Al Maha Desert Resort with spa pool was built.  In 2003, to protect the remaining desert landscape, 225 sq km was allocated to the Dubai Desert Conservation Reserve and H.H. Sheikh Ahmed bin Saeed Al Maktoum was appointed Chairman.   http://www.ddcr.org/en/