We made our way to the State War Memorial on Mount Eliza overlooking Perth Water.  A part of the War Memorial, the Cenotaph includes a roll of honour naming all servicemen and women who gave their lives representing Western Australia in combat:  the Boer War; World Wars 1 and 11; the Korean and Vietnam War;  most recently in 2012 in Iraq and Afghanistan.  The Flame of Remembrance and Pool of Reflection were inaugurated by Queen Elizabeth 11 during her visit in April 2000.

Numerous military memorials are placed around the park.  It was humbling, in the embracing heat of New Years Day, to walk along the Honour Avenues lined with eucalyptus trees, where each tree had a plaque in memory of a specific person lost in action:  a total over 1100 plaques.

Botanical knowledge of the trees and shrubs that thrive in the soil at Kings Park continues to evolve.  In 1898 red-flowering gum trees, Corymbia ficifolia, were planted along Fraser Avenue to celebrate Queen Victoria’s Jubilee.  Unfortunately attacked and killed by patch canker disease during the 1930’s, eventually they were replaced with Lemon Scented gum trees, Corymbia citriodora.

Kings Park consists of 1,000 acres with over 12,000 Australian plant species.  The Lotterywest Federation glass walkway links areas in the 45 acre Botanic Garden, taking visitors high up through shrubs and trees.

As many local people we met, our taxi driver was proud of the open spaces, monuments and ancient trees in Kings Park.  Its easy accessibility to the city and panoramic views across Perth, as well as the Swan River from Mount Eliza, have a unique appeal.

The Park’s history dates back to 1872 when the Surveyor General Malcolm Fraser had the foresight to set aside an area known as Perth Park for public use.  In 1890 Perth Park was enlarged to its current size and in 1901 the name was changed to Kings Park, in celebration of the accession of King Edward VII to the British throne.

Several young Boab trees have been planted.  The Boab is valued especially by local  indigenous people for its edible fruits and other medicinal uses.  Water is retained in its trunk.  In 2008 an established Boab, believed to be over 750 years old, had to be relocated due to expansion of the Great Northern Highway.  It was moved over 3,200 kilometres from Western Australia’s Kimberley region to Kings Park, as a special gift to all Western Australians from the local indigenous people, the Gija.  Today this tree is known as the Giant Boab ‘Gija Jumulu.’

It was great wandering around the Park where we were able to see tree ferns and agapanthus, that we have in our garden at home, in their natural habitats.  Family groups enjoyed picnics on the spacious grassed areas in the 30 degree plus temperature, many taking the opportunity afterwards to relax by the cooling water of the Pioneer Women’s Memorial Fountain.

We punctuated our visit with a tasty fish lunch in the restaurant before a second walk through the botanical gardens and an ice cream, wending our way to the bus stop, physically and emotionally sated.  With fellow tourists and Perth residents waiting for a return bus to Perth, we felt lucky to have experienced this unique open space:  more so because it is free, no entry or car parking charges.  Fantastic! 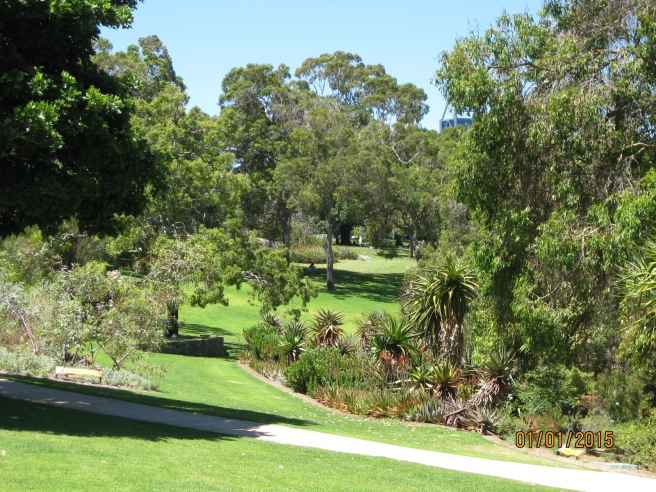