This is to let you know that I am continuing with the story of our special holiday that started on Christmas Day in 2014 and ended in February 2015 after visits to Australia – Perth, Sydney, Cairns – and New Zealand – Auckland, Waiheke, Rotorua and Lake Taupo.  So lots of writing for me!

A little time has passed since I started dianesdaysout with details about our first stop-over.  As a reminder, I have up-dated and am re-publishing the three posts about the Dubai desert trip.  Currently I’m working on Part 4, the Dubai Creek area.

Leaving Dubai, we continue to Perth where we were amazed by the ancient trees and plants in Kings Park botanical garden and the funny creatures living on Rottnest Island – not the humans!

Thank you for following dianesdaysout   Comments or suggestions are welcome and noted, and adjustments made where relevant.

I hope you all enjoy the next few weeks. 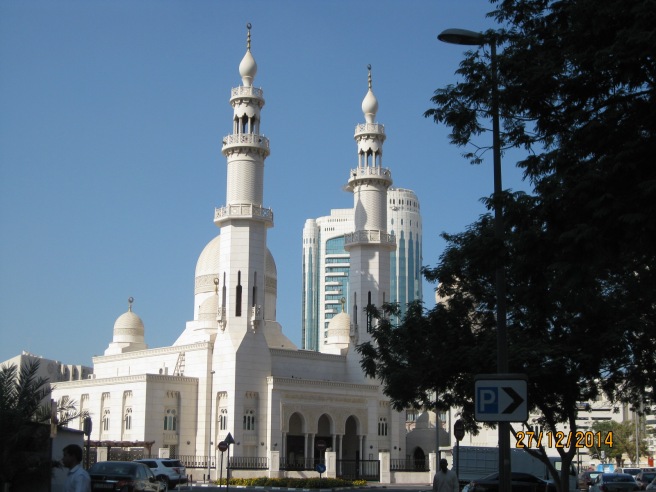 Our much-anticipated holiday started on Christmas Day.  We flew Business Class via Emirates to Dubai, the first stop on our six week break.  Paul and I were looking forward to our first local tour – a trip into the desert to watch the sun set over the sand and dine Arabic style in a deserted fort. 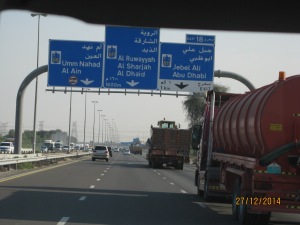 A driver, whom we later learned was called Mohammed, collected us from the Hilton Hotel in Dubai Creek, expertly steering the People Carrier along busy dual carriageways, modern roundabouts and road junctions.  ‘I wonder whether we’re the only ones going,’ I whispered to Paul.  ‘It’s overkill using this size vehicle if that’s the case!’  Paul joked.  The upper part of the Burj Khalifa, currently the tallest building in the world, was visible in the distance.  It reminded us of our disappointment at being unable to secure a reservation to visit this iconic building.

We were making good speed along a smart dual carriageway edged with grass.  A road sign showed we were driving along the Sheikh Zayed Road, that forms part of the E11 highway running parallel to the Dubai coast, from Oman in the East to Abu Dhabi in the West.  I felt glad that Sheikh Zayed, who had recently come to power when I lived in Abu Dhabi in 1968, had been honoured in this way.

Continuing along the busy highway, I noticed that dry yellow sand was replacing the green shrubs and orange marigolds and other brightly coloured flowering plants and grass running along the right-hand verge.  But gardeners tipping out potted plants and areas of freshly laid grass indicated a work in progress.   Our curiosity as to whether any companions would join our evening out increased as the driver pulled off the dual carriageway into a parking area in front of a shopping mall where a group of foreign-speaking men and women piled into the car.  As we continued our journey out of Dubai into the desert, we discovered they were a family group from Brazil.

After about thirty minutes we arrived at the Dubai Desert Conservation Reserve.   This large fenced area in the desert is owned by one of the Ruler’s cousins.  Scarce breeds of Oryx and other antelope, and indigenous plants and trees, are being re-introduced into the Dubai desert.  Leaving our People Carrier parked outside, we entered the Reserve where open Land Rovers waited.   Scarves were tied Arabic fashion around our heads.  Each lady had black and each man a red and white chequered scarf.  After a brief chat with his driver colleagues Mohammed indicated that we should climb into one of the yellow Land Rovers, joining the Brazilians we had arrived with:  six cousins in their thirties and forties holidaying together.

‘We look like a bunch of bandidos,’ the tall male leader said in heavily accented English, twirling his arms above his head.  The others spoke only Portuguese but we laughed with them, their cheerfulness creating a fun atmosphere in the back of the vehicle. 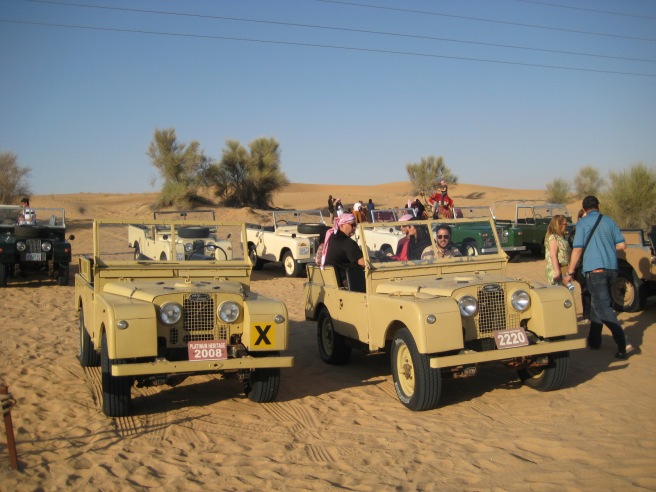 As we were driven along tracks in the sand we soon appreciated the protection afforded by our scarves as the wind whipped loose ends around our faces and sand clouds rose from the vehicles in front causing gritty pieces to work their way into the eyes, ears and nose of anyone trying to remove their scarf to speak.