Mention the ‘Isle of Wight’ and memories of family holidays in the 1950’s, when we stayed in then fashionable holiday camps, spring to mind.

In Brighstone Bay on the south-west coast, we were awakened each morning by the camp loudspeaker’s ‘Wakey-wakey’ call.  Dad put a dressing gown over his pyjamas to queue outside at a strategically stationed tea trolley, returning to our chalet with two cups of tea, for him and Mum.  We children raced to find a seat at the long tables set for our breakfast, loving the fact that the adults ate elsewhere.

Pocket money purchased a plastic green kite, its ability improved by the extra weight added to its elongated tail, before it was released to fly high above the windy green grass cliff top, together with those of like-minded children.  We were well looked after with organised games, running races and swimming competitions in the outdoor pool.  I relished racing around outdoors, returning home with prizes for athletics and swimming, no doubt helped by my special black running plimsolls and the ability to swim a mile by the age of 9!

Probably I have inherited my love of new places from Mum whose special holiday treats were family visits to the nearby picturesque villages of Brighstone, Niton or Godshill, where small keepsakes were purchased.

I love still the beach and the sea – the old-fashioned sea-side – so am thrilled to be spending a few days in Ventnor taking advantage of its cliff top and esplanade walks.  The Isle of Wight, with its slower pace, is reminiscent of life before our modern urge to rush, race and whizz about, allowing little time to stand and absorb.

The holiday starts as soon as the car is parked on the ferry in Portsmouth.  Even the cloud could not dampen our anticipation of a relaxing few days.  Passing other ferries and boats, the busy Solent reflected the various events taking place on the island this weekend.  The Royal Hotel in Ventnor was fully booked.  We were staying at the Wellington Hotel with town and sea views and within comfortable walking distance of various cafes and restaurants across from the beach below.  The one we chose that evening produced a good meal of local shellfish.

Next morning it was past eight o’clock in our comfortable room when the sun shining between heavy floor-to-ceiling curtains called us out.  We sipped tea on the wrap-around balcony of the Wellington Hotel’s best room, appreciating its panoramic seascape.  The bird’s eye view showed a few ‘white horses’ on some of the waves, whipped up by the fresh breeze.

‘Tricky but not too large so as to cause capsize.’

‘Perfect for today’s Round the Island Race.’

The start was in Cowes where competitors left in stages.  Smaller dinghies were followed by larger vessels over the many hours it took to release the total 1584 entries, all hoping to complete the 50 nautical miles to the finish.  They sailed west past Yarmouth:  to Alum Bay with its coloured sands and the historical Needles Battery – a military base built in the 19th century to guard the west end of the Solent – it is located above the familiar chalk stacks that form the Needles. Rounding the Needles, boats enter rougher water off the south coast of the island as they pass the Bays of Freshwater and Brighstone, sailing on to St Catherine’s Lighthouse warning unwary sailors they are approaching the most southern point of the Isle of Wight.  Continuing eastwards, the boats emerge round the western end of Ventnor Bay, behind the Spyglass Inn.  Sails coming into view increased in number so – as we had finished breakfast – we joined other hotel guests outside. 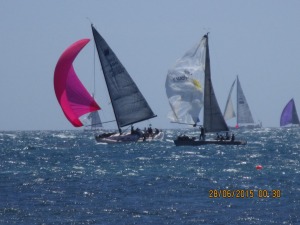 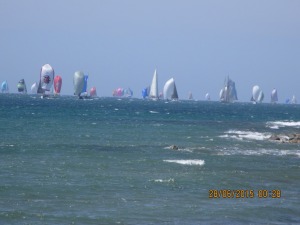 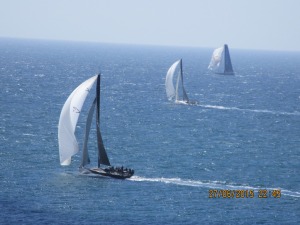 Back on our own balcony, we criss-crossed from side to side – snapping and zooming, zooming and snapping – ‘That one leaning with its red sail will make a good photo, no this is better.’ ‘Look, three racing close together….another catching them up.’

So many photo opportunities, it was difficult to stop, just a few more, click, click, click, zoom. Eventually, seeking more vantage points, we found a steep lane leading to the foreshore where children played ‘chase the waves,’ or dug their toes in the sand, seeming oblivious to the sailors striving for their personal best in the annual competition.

After coffee at the family-owned Spyglass Inn where we took advantage of its proximity to the competing sailors, we meandered along the beach.  A left turn took us onto the path leading up to the recently renovated Winter Gardens where we paused to admire the waterfall and colourful planting.  The Winter Gardens re-opened in 2014 after undergoing refurbishment, but is not yet finished.  Meanwhile its programme includes tea dances and regular Friday music nights.  The bar and restaurant are open, providing simple refreshments with excellent views across Ventnor bay.  Below the Winter Gardens sits the Haven Harbour, built in 2003 as a safe haven for local fishing and pleasure boats, where mackerel fishing, boat trips, and a sea safari are offered.   A restaurant, shops, fish and chip takeaway, and workshop used mainly for the fitting of Cheetah Catamarans, add interest to the Ocean Blue Quay.

After  walking along the Haven wall snapping the boats sailing on towards Shanklin and Sandown Bay, we returned past the Winter Gardens to walk through town, deciding to head towards Steephill Cove for lunch.